Wildfire Decision Support Systems (DSS) are critical tools for civil protection authorities in the management of all wildfire stages, including prevention, planning and combat. They enable the identification of areas prone to wildfire occurrences and can quantify the fire-risk associated. This allows to timely act and apply the necessary preventive measures to reduce the fire danger, in the short and long terms. During a wildfire event, DSS can be used to simulate and predict the fire behavior, allowing the planning and pre-positioning of the firefighting teams, the evacuation of the population from the affected areas, the closing of roads and railways, and the activation of backup systems for the affected infrastructures, including energy, water, communications, and transportation.

The fire behavior simulation tools can also be used to predict the effectiveness of fire suppression actions, to better coordinate and plan such efforts, as part of a risk governance system for wildfires.

The IMfire project proposes the development of a DSS platform capable of improving the current state-of-the-art DSS for wildfires, addressing some of their problems or limitations, as shall be explained next.

Tailor-made wildfire DSS are being used operationally for many regions around the world, for example, the Wildland Fire Decision Support System (WFDSS), built and used in the US, the Canadian Wildland Fire Information System (CWFIS) to support forest fire management across Canada, the Sentinel, used in Australia or the AFIS, used in South Africa. The advantage of having a tailormade solution is that it is calibrated and suited for the specific characteristics of each region, in terms of orology, vegetation, climate, previous occurrences records, firefighting means and legislations, among other factors. However, in some regions, such as Portugal, there is no specific DSS which can perfectly translate the local conditions.

“There is a need for a platform capable of collecting, dealing and processing all this data in real-time. This has become possible with recent advances in electronics and computer processing power – current High-Performance-Computing (HPC) and Cloud technologies can be successfully used in further developing the state-of-the-art fire behavior models and DSS.”

What we intend With The project

Web-based platform, adaptable to any region of the world, dedicated to civil protection in the integrated and intelligent management of fires in its various stages:

Numerical analysis for the efficiency of fire-fighting strategies 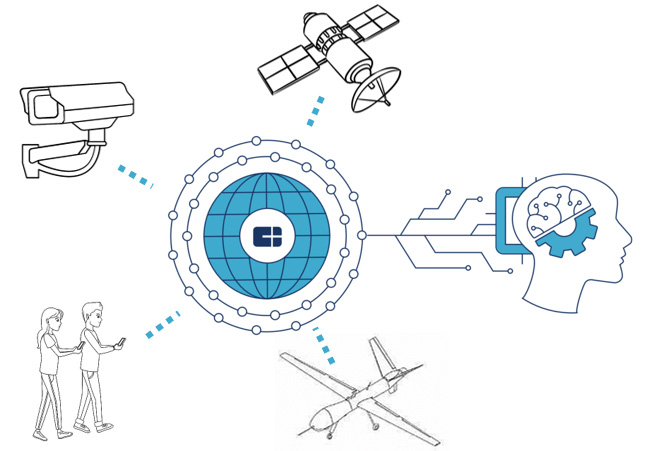 The Task 1 includes the creation of the new DSS platform. It also includes the integration of the functionalities for fire risk determination and behaviour and suppression simulations. Following an AGILE management approach, for a given functionality, 3 sprints shall be considered: 1) design; 2) implementation; 3) testing. After confirming that the functionality is working properly on its own and integrated with the remaining platform functionalities, it can be released.
The first line of research is fire prevention, done within Task 2, where a fire-risk index scale, aimed at the Portuguese reality, will be studied, and proposed.

The second line of research is fire prediction, done within Task 3, where computational intelligent (CI) methods will be used under two different phases. The first one is the intelligent calibration/tuning of the existing fire model from ADAI, the FireStation, using methods based on Evolutionary Algorithms, e.g. Genetic Algorithms, Particle Swarm Optimization, and Simulated Annealing, in order to reach more precise and updated models for each specific region. The second one is the intelligent fire prediction using CI models organized by a hierarchical structure, with different types of models, to fire prediction.

The third and final line of research is the simulation of fire suppression actions to access their effectiveness, done within Task 4. The methodology will be developed in the framework of Network Theory.

The final step of the project is to build a network model supported in a wildfire propagation simulation software.
Task 5, testing and validation, is a result of the constant work in all previous tasks, and happens simultaneously.
Tasks 6 and 7 include the dissemination and management actions.

“We truly believe in work, dedication, and self-discipline.”

Work With Experts and get results

Measuring the moisture content of forest fuels and assessing their behaviour within the new climate realities.
PCIF/MPG/0108/2017 – March 1st, 2019 to February 28th, 2022

Read More About Our Team

Project financed by Foundation for Science and Technology